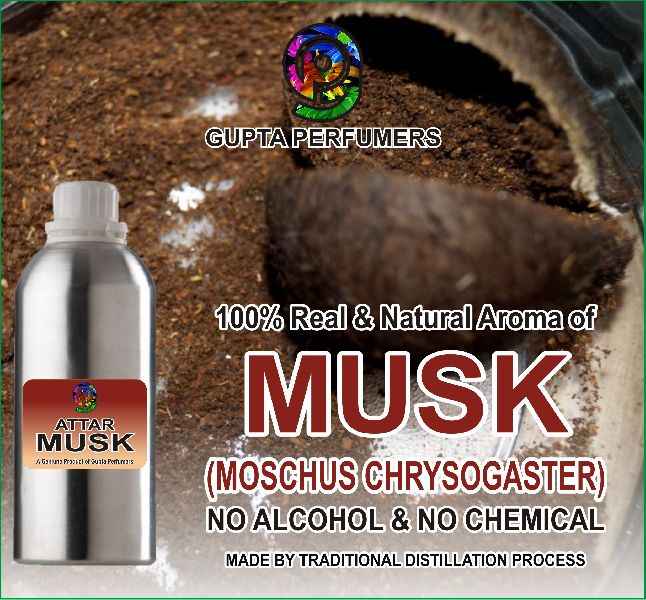 Description : We offer 100% Natural and Skin Safe Black Musk Attar is is quality processed using hydro distillation of herbs, flowers and spices that is followed by the maturing stages. The quality Black Musk Attar hence generated is used for providing solutions for joint pains, acne as well as skin problems. Other than this, it is also used as beauty care in creams and lotions..

History : The musk oil is produced from a gland removed from the bottom of the belly of the Asia Musk Deer, Tokapi Deer, or Chinese Wild Deer. It is about the size of a small orange, and can only be obtained from the adult male deer. It is the either boiled in oil, or dried in to grains. Using this method, all deer are trapped and it is estimated that it will take 3 to 5 deer to find a fully mature stag (male). In Russia alone that would be 60,000 deer killed in one year to equal the amount of musk sold at their markets. All this for perfumes (5 % of trade) and traditional medicines of China (bulk of musk trade) and others. Currently the musk gland is used in as many as 400 Chinese and Korean traditional remedies, that have been made for over 5,000 years if not more. But as the populations grow in that area of the world, it consumes the habitat of this species, while demanding ever more Musk Deer's gland! Laws are in place to protect and conserve these deer in their range.

Uses : Musk attar is widely used in the perfumery industry as a substitute for natural musk. Further, it is also used in meeting the needs of altering the smell of a mixture of other musks. Other than this, it is also highly beneficial in treating ailments like acne, joint pains and other skin related issues.