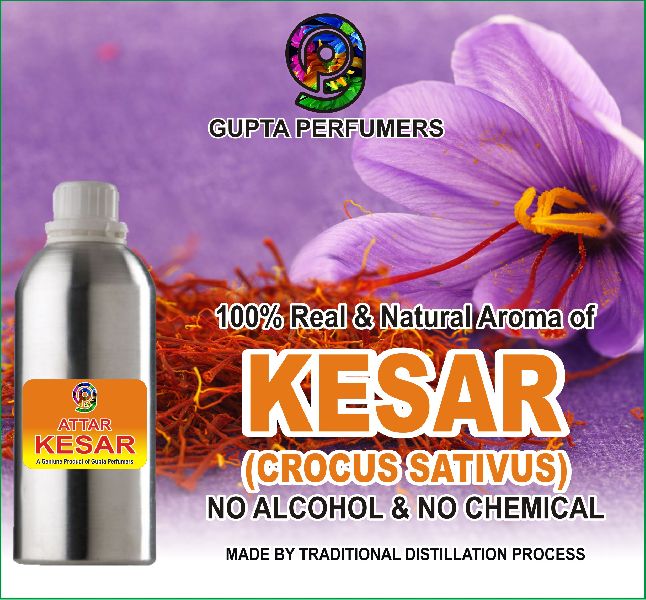 Description : Kesar Attar is well recognized for its sweet scent and essence. Extracted through steam distillation process from the flower part of the kesar plant, it is used with a blend of Sandalwood Oil and finds wide application in aromatherapy based applications as well as skin care formulations.

History : Saffron researcher till today has defined well when first saffron cultivation has begun on earth, but it is believed by majority of the historians that this might have happened during per-historic Greek times. According to Greek mythology, handsome mortal crocus fell in love with the beautiful nymph Smilax. But alas, his favors were rebuffed by Smilax, and he was turned into a beautiful purple crocus flower. However the history of saffron cultivation and usage reaches back more than 3000 years and spans many cultures, continents and civilizations.Saffron, a spice derived from the dried stigmas of the saffron crocus (crocus sativus) has remained among the worldâ€™s most costly substances throughout history. Some believe that origin of saffron is located on a vast area of earth like, Greece, Turkey, Iran and central Asia. According to other historical evidences saffron was brought to India by the Persian rulers around 500 B.C. Although the origins of saffron are confusing. One of the first historic references to the use of saffron comes from ancient Egypt, where it was used by Cleopatra and other Pharaohs as an aromatic and seductive essence, and to make ablutions in temples and sacred places. The ancient Greeks and Romans also prized saffron for its use as a perfume and deodorizer. They scattered it at public places such as royal halls, courts. The use of saffron was common during the Roman Empire, The Emperor Nero is said to have had the streets of Rome sprinkled with saffron for his official entry into the city.

Aroma : The relaxing aroma of this essential oil, sometimes described as like 'apples and straw' is an exotic and rich scent. It is commonly accepted as the best smelling of the Chamomiles.

Uses : Coming directly from the Kesar flower, Kesar Attar offered by us is used as fragrance oil in exotic skin care formulations. Further, it also has usage in natural perfume oil as well as in meeting the demands of aromatherapy based applications.